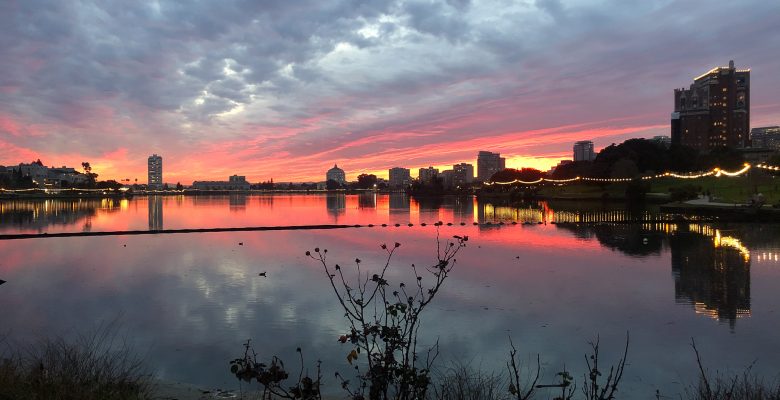 General Description of the Lake
Size: 140 Acres
Depth: 8 – 10 Feet (depending on tidal levels)
Depth near the shoreline: 0 – 4 Feet
Shoreline: 3.4 Miles
Watershed: 4,650 acres (including the entire City of Piedmont)The Oldest Wildlife Refuge
As established by state law on March 18, 1870, Lake Merritt is the nation’s oldest wildlife refuge; home to thousands of shrimp, fish, clams, crabs, sponges, copepods, tubeworms, tunicates, geese, ducks, songbirds, raptors, gulls, grebes, herons, pelicans, fox squirrels, opossum, an occasional deer a few turkey, and people.A Tidal Lagoon; not a Lake
Lake Merritt is a tidal estuary, which formed about 10-15 thousand years ago when the last ice age ended, but has been extensively modified by people in the last 150 years. It is flushed twice daily by the six hour cycle of high and low tidal flows and receives water from 62 storm drain outfalls around the lake. With water coming from the storm drains and the estuary the lake has brackish water (a mixture of fresh and salt water) but strongly tends toward a marine (salt water) environment.Flood Control
The great flood of Nineteen Hundred and Sixty Two:

The flood control structure
In response to the 1962 flood, county officials built a flood control structure along the channel at 7th Street. It includes tide gates and four diesel powered pumps that can even lower the Lake level during incoming tides. This facility provides protection from the 25 year storm, but not for bigger storms. It can be set to operate in five pump modes:

But when there is a 50% chance of rain in the forecast, tide gates are closed during incoming tides. In this mode, the Lake level is typically at 1.0 foot plus the amount of increase due to runoff.

The pumps are rarely used (only when tide gate operations are insufficient to prevent flooding).

The Lake Merritt Master Plan calls for a by-pass to be constructed around the flood control barrier using the adjacent pedestrian tunnel. This would allow small boats to travel between Lake Merritt and the Oakland inner harbor/SF Bay during low tides. Larger marine life such as sea bass, sea lions etc. would also have access around the flood control structure to and from the Lake.

Beneath the Surface by Damon Tighe