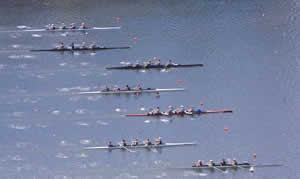 Printed in The Montclarion newspaper on October 11, 1991 By Dr. Richard Bailey.

We all know of the Downtown Mermaid, a beautiful statue watching us from her pedestal in the City Center waterway. She is a recent addition to this maritime city, but not the only mermaid in Oakland.

Another has been seen at Jack London Square, passing out golden coins while sitting on a half shell. This one, however, didn’t go near the water. But there is a history, supported by recent sightings, of a real mermaid in Oakland.

Long ago and not so far away, ancient Oakland settlers reported seeing a strange sight on the waters of lake Merritt. Some described it as a Loch Ness Monster-type apparition. Local biologists however, quickly dismissed that idea. Lake Merritt is too shallow (11 feet or less, depending on the tides) to support such a beast. But the sightings persisted, and the fleeting form gradually became recognized as – the Lake Merritt Mermaid.

Sadly, this beautiful woman was seen less and less often as Oakland developed, until at last she disappeared. And who can blame her? In the 1880’s, the vast majority of the city’s sewage was dumped into the arms of the Lake, untreated.

There weren’t as many people in Oakland then, and the tides (as they do today) flushed the estuary twice daily. But as our numbers grew, so did the problem. Water quality conditions were described as notoriously bad in 1926, and fish kills were reported in 1939.

Hard at work though, were the public works people, building sewers and wastewater treatment facilities. The most recent of these projects, the East Bay Infiltration/Inflow Connection program, continues today.

The efforts of these planners and engineers have been rewarding, as through the years – especially during the 1980’s – good water quality began to return to Lake Merritt.

Today, bacterial counts in the center of the lake during the summer are dramatically lower than in years past, and hundreds of topsmelt, yellowfin gobies, staghorn sculpin and shiner surfperch can be seen in the shallow, near-shore waters.

But something else has also been seen. As the waters of the estuary have become cleaner, occasional reports of a large tail, or a large fish with green hair and big, blue eyes have been heard at the lake Merritt Boathouse and Rotary Science Center.

Some astonished joggers even claim they have seen a mermaid in Lake Merritt. Has she come back?  Will she remain? The answer will depend on our continuing efforts in cleaning the estuary and our commitment to having a home suitable for mermaid.

Lake Merritt is Home to Many Boaters