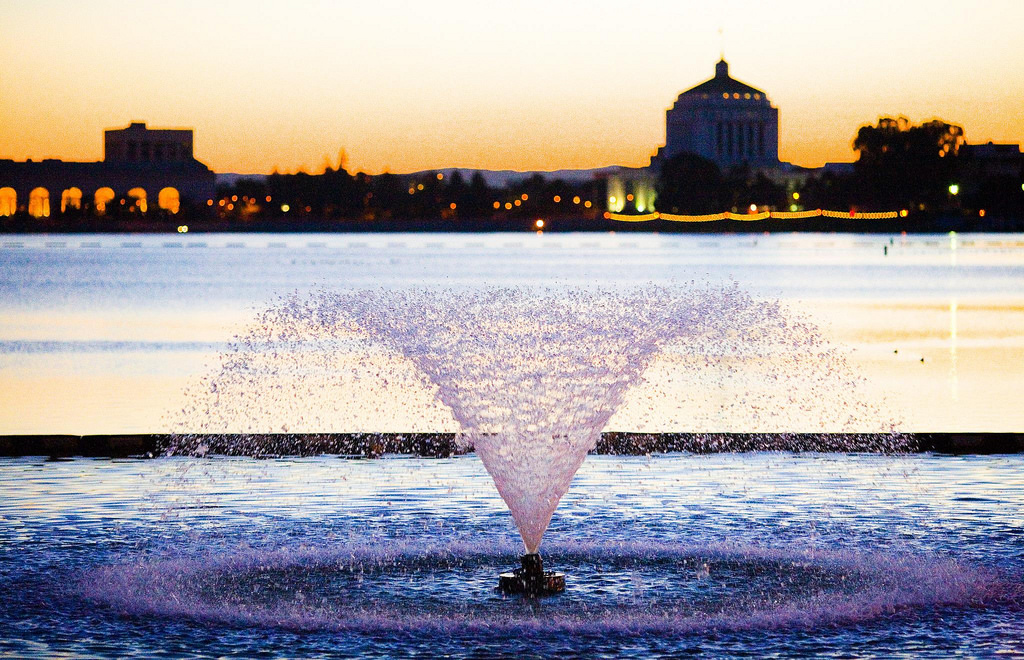 History
In 1995, the Lake Merritt Institute installed the first aeration fountain at Lake Merritt. Funds were raised by former chairperson Winn Walsh, including a grant from the Strong Foundation. The unit was located at the Trestle Glen arm of the Lake, behind the barrier encompassing the outfalls of storm drains 6, 7 and 8. It was donated to the City of Oakland and maintained by the Institute. After several renovations, this fountain was moved to the end of the Glen Echo arm.

In 1999, generous donations by Andrew K. C. and Magdalene Wong provided for the installation of two new fountains. They were located at the end of the Trestle Glen arm, and at the Bandstand Cove. A bronze plaque, in both English and Chinese, honors their generosity near the dock by the Bandstand Beach. A fourth fountain was added later at the 18th St.

After removal of the 12th St. dam and subsequent increase in high and low tide levels, the coves at 18th St. and the Bandstand beach became too shallow for the fountains, which draw water from several feet below the surface.  Intakes on these units began hitting the bottom, sucking mud and damaging the motors.  Placement in deeper water would have interfered with rowing, which is done with the rower facing the stern and unable to avoid a collision with offshore fountains.  Consequently, these two fountains had to be removed. A bubbler is likely needed at the 18th Street cove, which receives less water circulation than other parts of the Lake, and is subject to occasional algae blooms.

Purpose
These popular fountains add oxygen to the water, which is important because the uses of Lake Merritt have been listed by the U.S. Environmental Protection as being impaired by low oxygen. Water quality in an area of about one acre around each unit is improved by the transfer of oxygen from the air, and by mixing the top and bottom layers of the Lake. They also provide aesthetic enhancement to our Jewel of Oakland.

Maintenance
Maintenance is provided by the Lake Merritt Institute, including frequent power washing to remove barnacles, mussels, tubeworms et cetera. The cost of electricity to run the three horsepower motors is paid by the City of Oakland. Membership contributions are an important component of our ability to maintain the fountains.

The Embarcadero aeration Fountain
This 3 horsepower “Tornado” unit is designed for maximum aeration and is located at the confluence of the lake’s three largest storm drain outfalls, where drainage from over 2,000 acres is funneled into the lake here by pipes up to six feet across. The fountain brings oxygen to the water to compensate for the decay of leaves and other organic matter from these storm drains. As a result, odors are reduced and marine life is not subject to oxygen deprivation.

The Glen Echo Fountain
An older, two horsepower aerator at this location was replaced by a three hp unit in 2006 using funds from Measure DD. Located at the mouth of Glen Echo creek, its falling waters disperse hydrocarbons, soap and paint residues that flow down from the creek’s watershed.

Improvement of oxygen levels by the fountains is evidenced by the fact that the only two native oysters found in the Lake have been near the fountains, and an aeration bubbler.