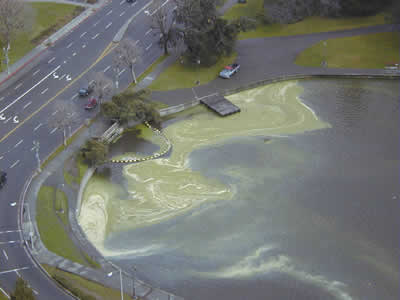 The following article by Dr. Richard L. Bailey, was printed in The Montclarion newspaper on February 23, 1996.

I saw one the other day: A storm drain polluter. He was clothed in bacterial slime and smelled of hydrogen sulfide. His teeth were filed down into long sharp points and his hair was oily black and infested with brake lining asbestos. And that wasn’t the worst part. His pores were leaking heavy metals like cadmium, mercury and lead. Pesticides glowed in his wet footsteps and every five minutes he would pull out a chocolate wrapper from his pockets and toss it away. This was no ordinary dude!

So I asked him, “Why do you pollute the storm drain? Don’t you realize it drains to Lake Merritt?” “I do? It does? he said.”

As I dared to draw closer, I couldn’t help but notice that he was exhaling pure methane. Smudges of fertilizers discolored his pockets and a bubbly film of restaurant grease oozed from his nose.

“I didn’t know I polluted the Lake” he said, “no one ever told me where the storm drains go.”

“Its a really big secret I replied, but now that the cold war is over, the truth can come out. Storm drains don’t go to treatment plants.”

“Gee, I never knew that” he said. “But does it really matter? Why should I care?”

“Listen” I said: “There’s only one thing in this world that really matters … and that’s people who care. If you don’t care – why should anyone care about you?”

And as he walked away I wondered – how many people out there are like that? We can all learn not to pollute the storm drain. So be careful. Now that you know what a storm drain polluter looks like … DON’T BE ONE!