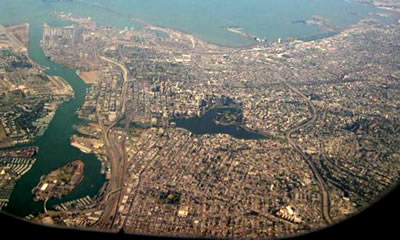 First published by Dr. Richard Bailey in the Montclarion newspaper on September 3, 1991.

“A lake,” says one citizen. “No! A tidal estuary,” says another. “An urban estuary” says a third. “The Jewel of Oakland,” says the Tribune. “A wildlife refuge, America’s first,” states a student. “It’s my home,” gurgles the Lake Merritt Mermaid (yes, she really is out there). Other answers might include “a big pond, sometimes smelly” or “my jogging path.” “The view from my window” would apply to some of us, and “the peace and quiet that calms my soul” could be said by many more.

On a more practical note, Lake Merritt is a climate buffer, moderating the extremes of temperature in the City. Hydrologists look upon it as a flood control basin, essential to preventing floods downtown.

To the city’s Office of Parks and Recreation, it’s home to Lakeside Park, which in turn supports Children’s Fairyland, the Lake Merritt Breakfast Club, Garden Center, Boathouse, Lake Merritt Institute, Junior Center for Art & Science and the Rotary Science Center. Would these facilities have been brought into existence without the Lake?

In reality, the Lake has profoundly influenced the land around it, from skyscrapers to parks, from homes to public buildings. One wonders how much Lake Merritt contributes to real estate values in Oakland, or to the hundreds of migratory waterfowl that fly in from the arctic every winter.

Such is the obvious relationship of the resource to the City. But isn’t there more? Is there a deeper benefit of the body of water that Dr. Samuel Merritt began to create 100 years ago? What would the land use be in this area of Oakland without the Lake?

What is the value of enjoyment that people obtain from the Lake, or the relaxation and long range views that allow them to forget problems and restore their perspective? And what would the joggers, boaters, sightseers and waterfowl watchers do if the Lake wasn’t there?

Truly, Lake Merritt has an influence on people, and a positive one at that. Aesthetically and spiritually, personally and as a city, the resource is a source of pride, hope and inspiration. If I were a literary eccentric, I would say it is part of the “there” in Oakland.